People coming from far and wide, the use of te reo Māori, and ‘Uncle Hemi’ were some of the highlights of the second Te Kāhui Rangatahi o Te Atiawa wānanga held at Owae Marae this past weekend.

The early summer weather in Taranaki hung around to provide the perfect conditions for the 80 plus participants who turned out for the wānanga.

Whānau came from as far as Whitianga, Tauranga, and the Kāpiti Coast to attend with the whakawhanaungatanga on the first night providing the opportunity for everyone to get to know each other a little more.

Facilitator, Matapaepae Urwin, said that the wānanga had an international flavour with a couple of manuhiri who had been invited by whānau to come check things out.

“There were two people from Portugal living with whānau who attended the wānanga, and were basically invited to come along. I think they were blown away by it all, and they fit right it as they were the same age as a lot of the rangatahi there. I think the wānanga reminded them a little bit of their own culture.”

Guest speaker, Emily Bailey talked about Parakore, a Zero Waste kaupapa, which the rangatahi found highly educational and inspiring to the point that they then engaged in a kōrero about what the kaupapa means to them and how they could contribute. 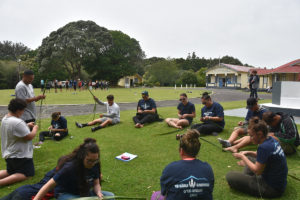 Activities such as the raranga, the mau rākau, and the poi, are becoming regular fixtures on the wānanga programme were particular highlights on day two.

The rangatahi also took part in a game of Ki-o-Rahi, with the whakaari taking place later that day, as well as a ‘Kangaroo Court’, which Matapaepae says was a particular highlight.

“After the whakaari we held a ‘Kangaroo Court’ which was crack up as. Then we ended the night with the band stand. Bass player Mayer Te Tau, one of the rangatahi from the first wānanga noticed that there were a few musicians in attendance, So we organised to have a band stand at this wānanga. We had one of the whānau from Kāpiti up on the keys, Hamuera Tamihana from Tauranga on drums, multiple guitarists, beautiful singers, We had a full band and went on well into the night, which was awesome!”

Matapaepae says that a highlight for her was the use of te reo Māori over the weekend and how there were a number of rangatahi who were using it.

“The use of reo throughout the weekend was awesome, just under half of the rangatahi spoke te reo.”

“When it came time for the Poroporoaki, we noticed about eight speakers on the paepae, and we thought that it was really promising and was awesome to see. It was something that we said to ourselves that we want to strengthen, along with the ability for our rangatahi to connect to their whakapapa, in wānanga in the future,” she said.

Matapaepae mentioned that CEO, Hemi Sundgren, or ‘Uncle Hemi’ as the rangatahi knew him, laid down a challenge to the rangatahi, “Kua takoto te manuka”, to encourage them to progress the wānanga kaupapa forward and to keep their connections with Te Atiawa strong.

“It was quite funny, there were a lot of rangatahi who didn’t know who Hemi was, so when they were asked by Mitch who they thought Hemi was, most of them said ‘Oh he’s uncle Hemi’, or ‘He’s bro Hemi’. Mitch then told them that Hemi was the CEO and they couldn’t believe it! It buzzed them out that this down to earth guy who was just getting involved in everything was the boss,” she said.

Some aerial photos were taken with the Te Kotahitanga o Te Atiawa drone, capturing the big “T.A” that the rangatahi formed on the marae as a mihi to Selwyn Lackner-Pirihi, who was another facilitator and one of the key people involved in making the rangatahi wānanga happen. Selwyn was unable to attend the second wānanga as he is currently working as a Marine Mammal Observer onboard the Amazon Warrior.

The next wānanga is planned for early next year. We’ll put out the pānui when details have been confirmed so watch this space!

Check out our Facebook page for more pics – facebook.com/TeKotahitangaOTeAtiawa